«Alley of Pioneers» planted on the territory of Skolkovo in Moscow

«Alley of Pioneers» planted on the territory of Skolkovo in Moscow

The unique eco-project called «Alley of Pioneers» that took place on May 24-25, 2021 in Skolkovo with the support of the partner company Job for Arabists, ended with planting signed cedars from Northern Altai and celebrating the Day of African Liberation in the presence of the Ethiopian Ambassador to Russia. 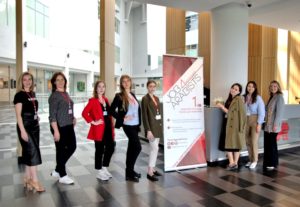 Moscow, May 24-25, 2021: The team of the Job for Arabists recruiting agency has become a partner and participant of the public eco-project «Alley of Pioneers», dedicated to the 60th anniversary of the flight of the first Soviet cosmonaut Yuri Gagarin into space. The event that was held near the monument to Yuri Gagarin and the launch capsule installed near the R&D Renova building in Skolkovo, was honored by the presence of special guests who were also invited to commemorating the Day of African Liberation that is commonly celebrated on May 25. 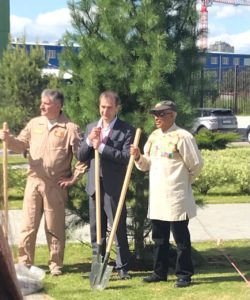 The ambassador of Ethiopia and a pilot from «Russian Helicopters»! And the first cedar!

Councellor at the Djibouti Embassy

The lead guest of honor from African countries was the Ambassador Extraordinary and Plenipotentiary of Ethiopia Aargau Alemayehu Tegenu, who warmly greeted all the guests, congratulated them on the Liberation Day of Africa and took an active part in planting the first cedar along with the organizer of the event, i.e. editor-in-chief of the Pustelga news agency Alexei Pavlov. Harbi Said Moussa, Counselor at the Djibouti Embassy in the Russian Federation, also welcomed and participated in such important eco-projects.

The list of honored guests of the eco-project features representatives of the aerospace industry: Russian Helicopter Systems (our mobile correspondent Anna Tsymbal interviewed the helicopter pilot who arrived at the scene), pilot Galina Petrovna Skrobova-Koshkina from the Aviatrix squad — 2nd pilot of the Mi-24V helicopter, who flew on the Moscow — Miami route, director of the Foundation for the Support of Children’s Technical Creativity named after the USSR Pilot-Cosmonaut, Hero of the Soviet Union A.A. Serebrov Vladimir Petrovich Lositsky. In addition, the co-founders of the Do Good Foundation, singer and linguist Pavel Kashin, representatives of the press and public organizations took part in planting the cedars. 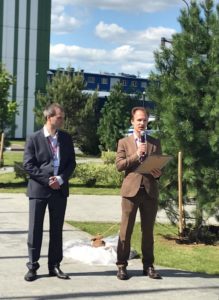 The solemn opening on behalf of the deputy of the State Duma D. B. Kravchenko was read out by his assistant and presented to the organizers of the eco-project. At the end of the solemn part, everyone present took part in the ceremonial planting of six personalized cedars named after the great pioneers of the space industry:
1) Valentin Petrovich Glushko – creator of rocket engines;

The Job for Arabists team took an active part in arranging and holding the event, and was also involved in the landing of Cedar No. 3 named after E. Pilyugin. In addition, we have effectively implemented a specially prepared cultural and educational program for all the guests and participants. 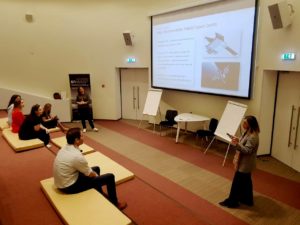 Thus, Elena Olkhovskaya, Executive Director of Job for Arabists, and Anastasia Ivanova, Director of Translation Agency  «Arabist», prepared a presentation on «The Role of Arab States in the Space Industry», during which an interview with the head of the Egyptian Space Agency was broadcast, specially recorded by us in Cairo on the eve of this event. 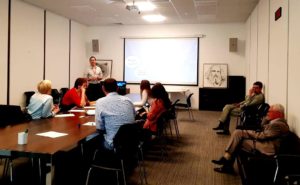 The teacher of our online Arabic courses «SpeakAr» Ammar Brebdani held an open master class in Arabic for all invited guests of the Alley of Pioneers project and employees of the Renovo-Lab office center. 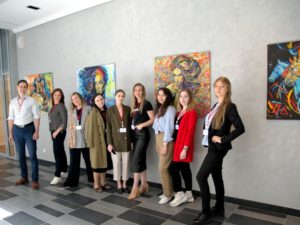 The the two-day event program was quite varied and informative. Many of those who arrived in Skolkovo these days were just lucky. On May 25, 2021, the famous singer, composer and linguist Pavel Kashin, being a guest of the event, for the first time officially presented his new language NeoLanta to wide audience, which he is currently working on. According to Pavel’s decision, the same date became NeoLanta’s birthday! Both the announced date and the event are very symbolic, since Paul is also a kind of «pioneer» coming up with a universal language that is going to have no more than 2000 words. 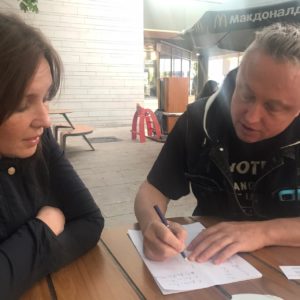 According to Pavel, «anyone can learn NeoLanta, even those who do not speak any of the foreign languages and believe that he or she has no talent for learning them». During the presentation of his language, Pavel spoke about the logic of the new words occurrence and the birth of interesting phrases in NeoLanta, explained the melody and poetry of the sound of the created language. You can learn more about the new language on the official page of Pavel Kashin on VKontakte!

«We thank the organizers of the Alley of Pioneers eco-project Pustelga for the opportunity to act as its partners, to take part in planting our cedar, for the lively communication full of interesting people, whom we were able to tell about our company and how the countries that we are closely connected with by the nature of our activity, are now looking to space, and what space programs are being implemented there», said Elena Olkhovskaya, Executive Director of Job for Arabists.

«Moreover, during the preparation for the event, we found out that the grandfather our company’ employee Daria Anikeeva was part of the first Soviet cosmonaut corps together with Yuri Gagarin! This seemingly randomness made it possible for us to understand once again that all accidents are actual opportunities for all of us, for moving forward and reaching new horizons! This is how we work at Job for Arabists, this is how we cooperate with our customers of HR, linguistic and educational services».

And of course, for two days of eco-events in Skolkovo, the Job for Arabists SMM team actively covered all the events, including the landing and takeoff of the Russian Helicopter Systems helicopter, master classes and presentations, live communication of guests, and planting the cedar alley! It was exciting! All live broadcasts from this event can be viewed on our Instagram page.

Link to the interview with the helicopter pilot