The Job for Arabists recruiting agency was the official partner of the gala reception given by the Emirati Embassy in Russia at the 50th-anniversary celebration of the United Arab Emirates. 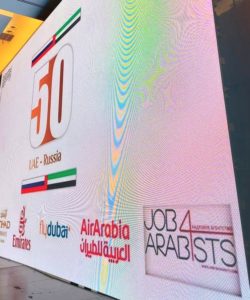 Moscow, November 29, 2021: The year 2021 has become a jubilee for the UAE, and on December 2, 2021, the whole country will widely celebrate its first «golden anniversary» — the 50th anniversary of the founding of the state.

In anticipation of this grandiose even for all residents and guests of the United Arab Emirates, on November 29, the Emirati Embassy in Russia gave a gala reception at the Lotte Plaza hotel in Moscow, bringing together representatives of  various countries’ diplomatic missions to Russia, and numerous honorary guests and journalists of Russian and international publications and news agencies. 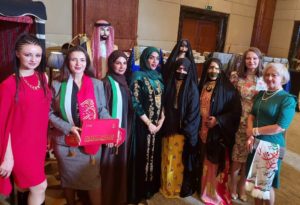 For the first time and precisely in the year of the “golden anniversary,” the Job for Arabists recruiting agency was invited to the celebration as an official partner and guest. «It is a great honor for our young and rapidly developing company to become the official partner of the official reception in honor of the 50th anniversary of the UAE, along with such famous names such as Etihad Airways, Mubadala, Emirates Airlines, Flydubai, and AirArabia,» said Vyacheslav Yeliseyev, founder and CEO of Job for Arabists. «We are proud of our friendly and partnership relations with the UAE Embassy in Moscow. We are grateful to the staff of the Embassy for their attentive attitude and support of our projects, among which one of the most recent was our company’s Russian language publication of the book «Mango Tree» by an Emirati writer. Such a partnership has allowed us to expand the horizons of cross-cultural communication and helped strengthen ties between the Emirati and Russian peoples in various fields.» 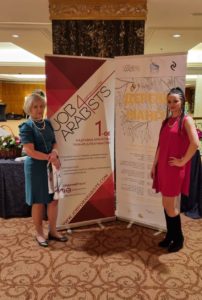 The state of the United Arab Emirates was founded on December 2, 1971. In his welcoming speech to the assembled guests, Mohammad Ahmed Al-Jaber, the UAE Ambassador Extraordinary and Plenipotentiary to Russia, emphasized that the UAE is celebrating not only the anniversary of its founding, but also the 50th anniversary of the establishment of diplomatic relations with the Russian Federation, and also continues to follow the principles of world peace, sustainable development, and prosperity, laid in the foundation of the state by its first president, Sheikh Zayed bin Sultan Al Nahyan.  The primary guest from the Russian Federation, Aleksandr Anatolyevich Pankin, Deputy Foreign Minister of the Russian Federation, solemnly congratulated the government and people of the United Arab Emirates on the 50th anniversary of the country’s founding in his response speech. He also noted the vital role the UAE has played in solving many global problems and challenges in the Middle East region and wished everyone health and prosperity. Among the guests of honor at the reception was Dmitry Sergeyevich Peskov, press secretary of the President of the Russian Federation, along with other officials.

After the hymns of the two countries and solemn speeches, the unofficial part of the holiday began, where many guests were surprised by the traditional Arabian dance by Bedouins in traditional clothing performed by the embassy staff, where the ambassador himself was at the head of the dancers. 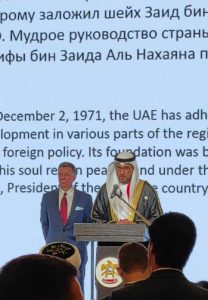 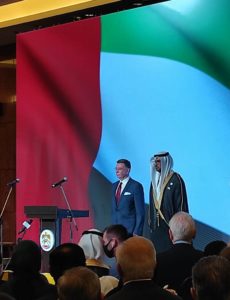 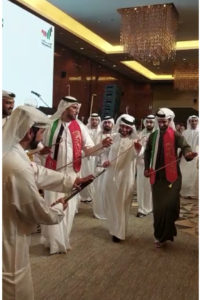 The partners of the celebration prepared gifts and pleasant surprises for the guests. Over the course of the raffle, the airlines presented the lucky winners with trips to the UAE and electronics. Job for Arabists recruiting agency presented the UAE Ambassador and the main guest with the newly published books «Mango Tree,» and guests received raffle prizes of several certificates for Arabic language courses, the services of its proprietary translation agency, and purchases in the online store for Arabists. 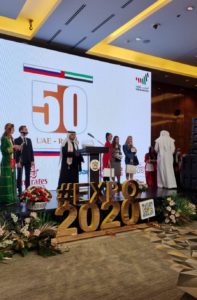 The celebration ended with casual conversations and traditional Emirati food accompanied by national music. The UAE Golden Jubilee in Moscow was indeed a warm and colorful celebration. Such as the United Arab Emirates itself, which grew out of the golden sands of the desert and became one of the most beautiful and progressive countries in the Middle East. 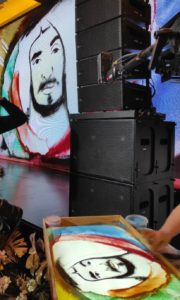